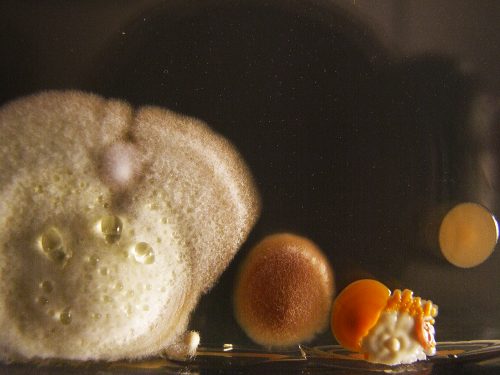 Hill is currently developing his practice alongside internationally renowned scientists at the Centre for Bacterial Cell Biology, (CBCB) at Newcastle University to develop a programme of artwork that is inspired by “hitherto unseen kingdoms”.

This ambitious project is in collaboration with the Centre for Bacterial Cell Biology at Newcastle University. It began in 2015-16 and the proposed artwork is with the support of the Director, Professor Jeff Errington, FRS, Professor Colin Harwood, and DR. Richard Daniel. Hill’s curiosity of the microbial world was initially triggered by a life-threatening streptococcal infection in 1990, that profoundly influenced his artistic development and stimulated a desire to consolidate his current practice alongside scientists. The project is about fostering a culture of excellence and ownership between the public, visual art, and science, and it is hoped that the collaboration will extend into, exhibitions and a programme of public activities.

” The art practice which the artist Derek Hill has set up with scientists of the University of Newcastle is remarkable for the ways in which it represents an unfaltering stream of exceptional work that Hill has produced since the 1970s and the persistence that he has shown in linking his art production to collaborative projects with professional artists and non-professionals. When he left the Royal College and was travelling in Africa, Hill’s life was put in jeopardy by a bacterial infection. The trauma of that experience has been a mainspring of his work over several decades, and it found a ready response from the university scientists. The resulting link of intense lab work, scientific interaction, and high-tech time-lapse imaging with the organic nature of his art practice presents a remarkable opportunity for the creation of new and exciting artwork, and the engagement of university personnel, schools, and communities “. J.Millard